For all of the fans and followers of Bernard Cornwell’s Warrior Chronicles series, our long wait is almost over! Last Kingdom now has an official air date- Saturday Oct. 10, 10/9c. Coincidently, this air date very closely coincides with the release of the next book in the series. That book, Warriors of the Storm has an official release date of Oct. 8. I did mention previously that I thought this book release date might be tied into the airing of the show.

I know I have posted the upcoming book preview before, but I am posting it again just to refresh our memory!

The new novel in Bernard Cornwell’s number one bestselling series The Warrior Chronicles, on the making of England and the fate of his great hero, Uhtred of Bebbanburg.

A fragile peace governs the kingdoms of Wessex, East Anglia, under the rule of the late King Alfred’s son, King Edward, and Mercia, under his daughter Aethelflaed.

Uhtred, her formidable champion and greatest warrior, controls the northern parts from the strongly fortified city of Chester. But no one can prepare them for the storm that is about to descend…

The Northmen, allied to the Irish, come in force under the cover of night, up the Mersey, perhaps to attack Chester, perhaps to rage and pillage through Mercia, perhaps to take the troubled kingdom of Northumbria. They are led by the terrifying Viking warrior, Ragnall Iverson, a fierce fighter and ruthless leader.

He and his army are formidable enough but worse still, his brother is married to Uhtred’s daughter. With his passionate determination, Uhtred will stop at nothing to take back his corner of Northumbria and secure the future of Bebbanburg. But for Aethelflaed and the Mercians, doubt must arise to where his loyalty lies.

In the struggle between family and loyalty, between oaths given and political demands, there is no easy solution. And the clash between the Vikings and the Saxons will resound across the land.

Here is the official show information as posted on BBC America.

The Last Kingdom premieres Saturday, October 10 at 10/9c. The Last Kingdom is a contemporary story of redemption, vengeance and self-discovery set against the birth of England.

This historical drama comes from BBC America, BBC Two and the Golden Globe® and Emmy® award-winning producers of Downton Abbey, Carnival Films. The series is an adaptation of Bernard Cornwell’s best-selling series of books “The Saxon Stories”, by BAFTA nominated and RTS award-winning writer Stephen Butchard.

9th century AD; many of the separate kingdoms of what we now know as England have fallen to the invading Vikings, only the great Kingdom of Wessex stands defiant under its visionary King Alfred the Great (Dawson). It is the last kingdom.

Against this turbulent backdrop lives Uhtred (Dreymon). Born the son of a Saxon nobleman, he is orphaned by the Vikings and then kidnapped and raised as one of their own. Forced to choose between the country of his birth and the people of his upbringing, his loyalties are ever tested. What is he — Saxon or Viking? On a quest to claim his birthright, Uhtred must tread a dangerous path between both sides if he is to play his part in the birth of a new nation and, ultimately, recapture his ancestral lands.

The Last Kingdom is a show of heroic deeds and epic battles but with a thematic depth that embraces politics, religion, warfare, courage, love, loyalty and our universal search for identity. Combining real historical figures and events with fictional characters, it is the story of how a people combined their strength under one of the most iconic kings of history in order to reclaim their land for themselves and build a place they call home. 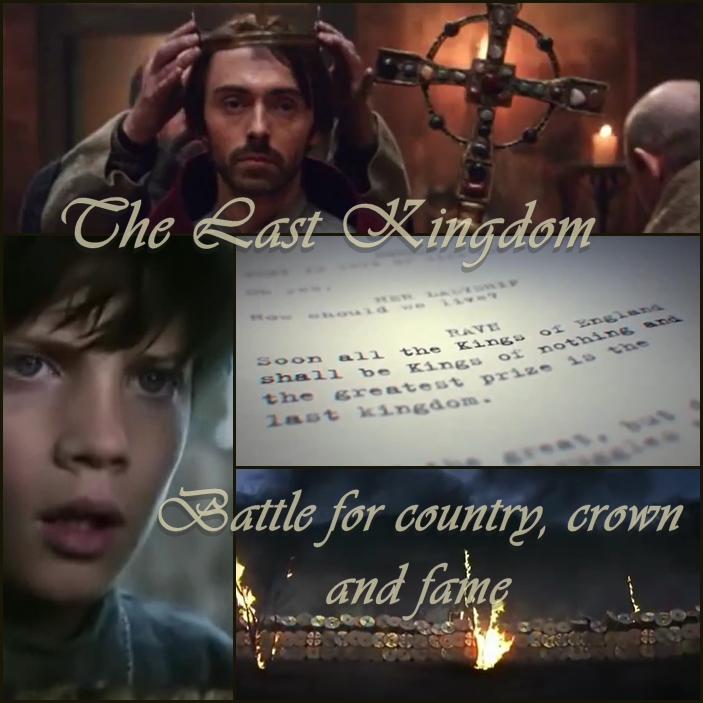 You can read my pervious update on the show in this earlier post:  https://timeslipsblog.wordpress.com/2015/05/25/temporary-cure-for-viking-withdrawals-last-kingdom-update/

If you are a regular viewer of this blog, you will be aware that I am a devoted and loyal fan of Bernard Cornwell and his Warrior Chronicles series.  This in no way takes away from my loyalty or passion for Michael Hirst’s version of the Vikings saga. I am looking forward to seeing how the two stories play out in comparison to each other! Michael Hirst gives us a version that tells the overall story of the Vikings Saga beginning with Ragnar Lothbrok and the earliest arrival of Vikings in England. His emphasis so far has been more from the Viking perspective and his focus has been on Ragnar’s adventures, conquests and defeats. Hirst is moving the story into the next generation this next season, while also telling the story of Rollo’s quest for fame in Normandy. Bernard Cornwell’s version tells the story from a slightly different perspective, that of a young Saxon English boy, Uhtred of Bebbanburg who is captured and raised by the Northmen. His life and his story is one of torn loyalties as he has to make choices and compromises in order to stay alive and achieve his one goal of reclaiming his birthright, Bebbanburg Castle. Cornwell explores the history of that somewhat later time frame that Hirst is moving into with his Vikings Saga. The Last Kingdom will show us young Alfred’s struggle to hold on to his own birthright, Wessex, and his fight to unite the Saxon kingdoms in battle against the Northmens’ conquest for territory.  In reading Cornwell’s series, and watching it play out on screen, you will see some of the same historical characters that you have been introduced to in the Vikings Saga. You should eventually see Ivar and Ubba now fully grown older men, along with a young Alfred inheriting the crown of Wessex. Cornwell’s version plays with the historical timeline and events a bit as well, but not so much possibly, as Hirst has done in telling his version of the story.

I firmly believe that those of you are loyal to Hirst’s version of the Vikings saga should not look at this new show as competition, but should welcome the opportunity to see yet another version this fascinating history come on the scene! What the production of this new show proves is that there is a growing interest and fan base for all of these historical fiction based shows. The more interest there is in the entire genre, the greater the chances are that the interest will influence networks and promoters to continue such shows and invest more funding into them. There has been some speculation and rumor that the Vikings on History channel only got their 20 episodes for the coming season because they may not return for a following season. I would prefer to think that, as Hirst has commented, the higher powers in control have taken heed of the growing interest and fan base, are realizing the potential benefit of giving fans what they are asking for- more and not less of the show! Vikings viewers should welcome these other shows and their competition as it shows those higher powers controlling the money and production that people want to see this sort of show. It also raises the level of the playing field, the production and quality of what is being offered… Perhaps this is one reason we will get 20 episodes in the next season. It’s just a thought to keep in mind when you debate on whether to give Last Kingdom a chance to prove itself!